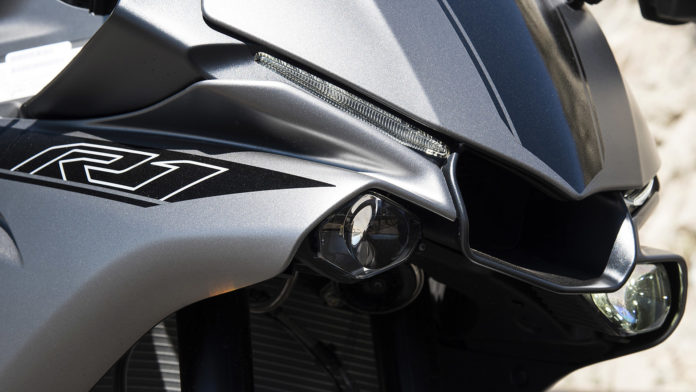 Yamaha’s YZF-R1 model has been a huge hit since the company first introduced it in 1998. However, despite being a fan favorite, the brand continues to improve upon the model each year, making an already unbeatable bike even more so. Needless to say, the R1 is not for beginners, and it’s not cheap, two facts that may have actually prevented Yamaha from helping the R1 reach its sales potential. So, what did the brand do? They reinvented the R1 to develop a cheaper, more beginner-friendly version.

With advanced electronic control systems, a crossplane 4-cylinder engine, aluminum Deltabox frame, magnesium wheels, ABS and countless other advanced features, the R1 is and always has been a technological feat in modern motorcycling. That said, when Yamaha said it was going to release a “cheaper version,” fans scoffed. What was next? Cheap motorcycle helmets? However, true to style, Yamaha surprised the biking world with a bike that was virtually similar to its predecessor, less a few components.

The R1S features the same track-ready technology as the R1, including traction control, adjustable launches, ABS, slide control, etc. However, the bodywork is slightly different. Instead of being wrapped in carbon-fiber bodywork, the body of the R1S is wrapped in plastic. While you might think that might make it more lightweight than the more expensive version, you’d be wrong. This is due to the fact that instead of utilizing magnesium on features such as the wheels, the R1S utilizes mostly aluminum, which is heavier. This change makes the bike nine pounds heavier than the R1.

The R1 features also features a titanium oil pan, where the oil pan on the R1S is made of aluminum. The titanium exhaust on the R1 is replaced with stainless steel on the S model. The S’s bolts on the engine cover are also made of heavier steel as opposed to lighter weight, more durable and more expensive material.

There are several other components on the R1S for which titanium has been swapped for steel. For instance, the valve spring caps and connecting rods are now made of the bulkier material that, while it increased the weight of the bike, helped drop the price by $1,500. The quick shifter on the R1 is a given, whereas on the R1S, it’s an add-on.

When it comes to power, ergonomics and suspension, those on the R1 and the R1S are virtually identical. However, the R1 does allow riders to select between customizable settings on a high-tech instrument panel, something owns of the R1S cannot do.

Accessories To Go Along With Your R1S

Though the R1S may be the “poor man’s” version of the R1, it doesn’t look or act like one. Other than a few minor differences in materials, which even the most avid Yamaha enthusiast wouldn’t be able to notice with the naked eye, the R1 and R1S are virtually identical. If you want an envious bike without blowing your motorcycling budget on the bike itself, look into the R1S. However, remember that just because it comes with the price tag of a beginner’s bike doesn’t mean it’s for newbies. Invest in the best head protection and riding gear for those first few times you underestimate the bike’s power.

Also, make sure you have a go-to source for quality aftermarket parts such as a replacement motorcycle battery, suspension kit and more. Shop the parts you need today.

The Criminal Justice Process in Colorado