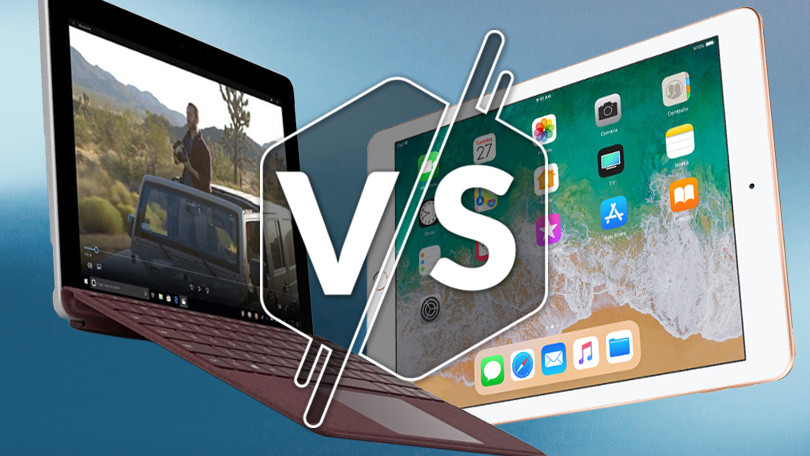 Surface Go and iPad are the two most powerful tablets at the moment. But not all tablets are created alike. Of all the other low-cost tablets in the market – Microsoft seems to stop rivaling Apple and the only goal is Apple’s defeat. In this post we will broadly compare the two most wanted models in the market at the moment. Together we will examine both cases like purchasing a Surface Go – and – that of purchasing an iPad. We hope that you and the readers will inform you more. You may then decide if you want to buy a tablet soon.

> Check out: SSD, that’s why it turns on old and sluggish PC into life

Will Microsoft’s new Surface steal the attention of the famous iPad?

Both touchscreen devices have good hardware, fantastic display and are also easily transportable.

Initially we will explain the three main points of comparison – DESIGN – PERFORMANCE – and – PORTTABILITY. Then we will give the advantages of buying each of the tablets. In the end, there will be a final conclusion regarding the two tablets.

The Apple iPad 2018 comes with the classic design of all of the iPad series. Unlike his predecessors he looks alike and that’s not a bad thing. The overall appearance of both tablets actually looks really premium. But we must admit that this is not the most superior of the world of technology.

Clearly, Surface Go is very well suited to the mouse and keyboard rather than touch.

On the other hand, Apple’s iPad software is more functional and convenient to touch.

When it comes to external connections, Surface Go comes with a USB-C. It is also equipped with MicoSDXC card reader and of course headphone box. It is known that the iPad has fewer connectivity options with just one headset and one Lighting port.

Both software is distinctly different. The Apple iPad is powered by the iOS platform and is limited to apps from the App Store. While Surface Go is powered by full Windows 10. Despite the fact that Surface Go comes with Windows 10 S that forces you to only use applications from the Windows Store with some minor maneuvers you can install the full version of Windows 10. 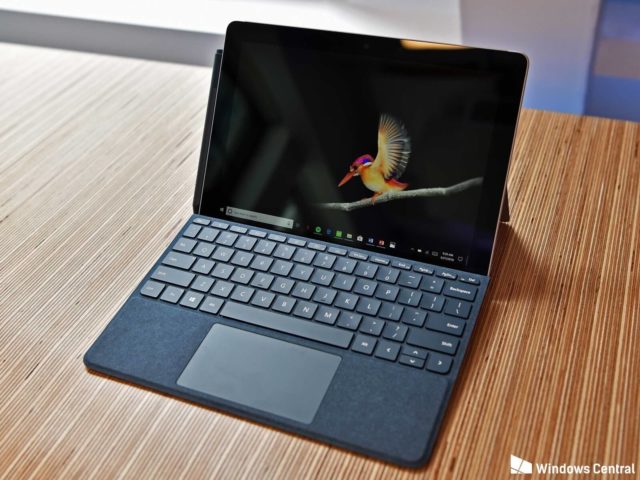 One of the most important aspects of a tablet is Display. Both tablets have a fantastic touchscreen panel. The Apple tablet comes with a 2.048 x 1.536 Retina display that makes it look sharp and in good colors. There is a screen as black as we are accustomed to the Samsung screens for a $350 price is very good. Surface Go has a smaller resolution – 1,800 x 1,200 with a much lower pixel density than the iPad (256 vs 217) but still looks very good on the 10-inch screen.

Leaving aside the screens, we go to the hardware parts of the tablets. The Apple iPad comes with the A10 Fusion processor coupled with 2GB of RAM and memory ranging from 32GB to 128GB. Surface Go packs an Intel two-core Pentium Gold processor with 4GB of RAM and 64GB of memory. But this is not the only option because Microsoft offers the option of 8GB of RAM and 128GB of memory. In the paper, this gives Surface Go advantage, but during the testing there is no big difference between them.

The biggest difference between the two is the graphical performance. Although the Pentium processor has the Intel HD 615 graphics chip – this processor is not able to handle even the simplest 3D rendering of PowerPoint. On the other hand, the iPad is specially designed to handle heavy games and almost takes over everything that is downloaded from the App Store. 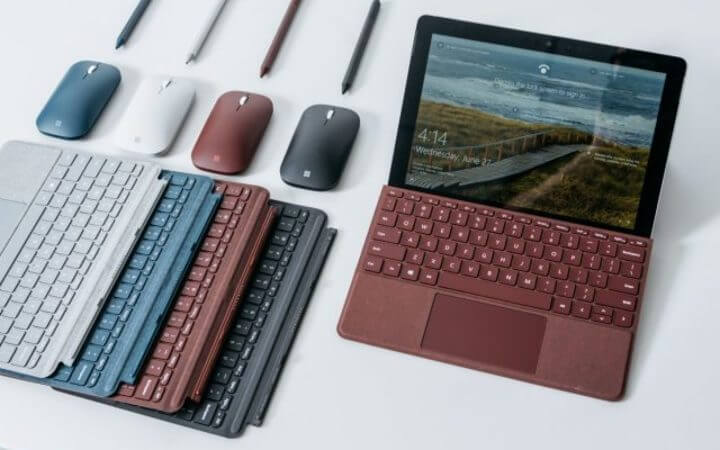 Even the battery seems to be in favor of Apple’s hardware. Apple advertises for about 10 hours of commonly used batteries. On the other hand, Microsoft’s overall use shows that Surface Go’s battery can handle a working day – so it’s 8 hours of use.

For light and small devices like these in our opinion, we would choose the iPad as your daytime companion. Normally 2 hours more battery make the difference.

> Check Out: Can i leave my laptop always charged? Will it damage the battery?

THESE ARE THREE MAIN FIELDS WHERE WE HAVE COMPARED TO TWO TABLETS.

WELL, WHAT DO YOU THING, WHO WILL WIN? ?

Let’s now move on to the part where we will highlighting their positive sides. 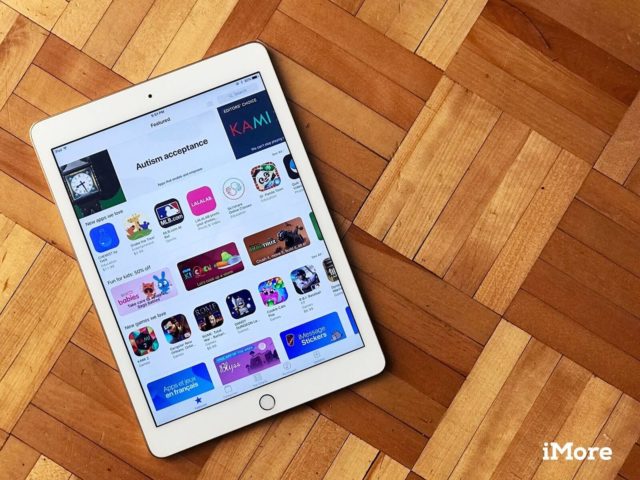 Why Should I Buy iPad From Apple?

If you are just looking for a tablet iPad is the choice you should do right now. The normal version starts at $329 for the 32GB model and just Wi-Fi without a phone network. If you want the other model you will need to add $100 to get the 128GB version. While the phone network model costs $459. All models have only 2GB of RAM and the A10 processor from Apple.

Currently you can not buy a Surface Go version with a telephone network. For this we will have to wait. Believe it or not you can get the latest iPad for $70 less. If you do not want to waste much – the winner here is the iPad.

IPad’s latest generations support Apple Pencil, which you can get for only $99. The Surface Pen costs only $80. Also, if you need a keyboard, it will spoil you. For keyboards, see Shopping Websites – where you will find a variety of keyboards.

WINDOWS 10 TABLET VERSION IS NOT A GOOD APPROACH TO IPAD.

The 100% touch interface, and as a result is perfect on the tablet. This may seriously delay you to consider the iPad as a buying opportunity. 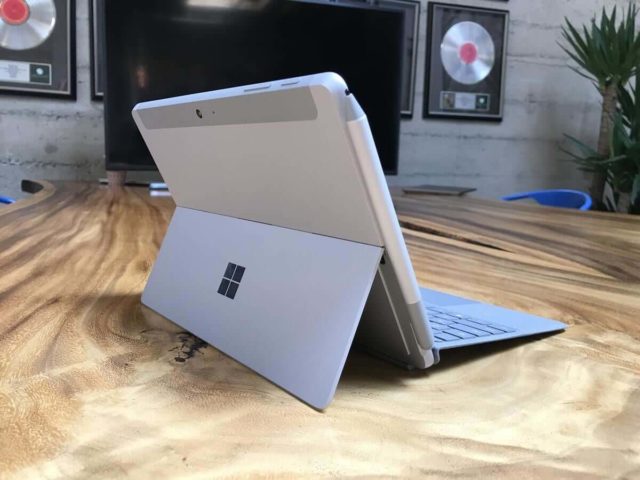 Why Should You Buy Microsoft Surface Go?

Apple’s iPad apps consist of slogans that “it’s like a comer”. But the problem is that if you really want a computer, a phone-sized computer, something for productivity – Surface Go is the best choice you can make.

Suffice to mention some basic things. He is a real computer. It is a device that has the full version of Windows 10 installed. Also, Surface Go can not add just one keyboard. It is designed in such a way that it does not only work on the keyboard but also with the mouse – which the iPad does not offer.

So even though Surface Go is a touchscreen you do not have to use it. It just turns it into a laptop and continues to work as usual.

Surface Go really is not a tablet as good as the iPad but you can use that way. Also adding here and the Surface Pen support it gives you the giant chance to turn it into a digital notebook.

Surface Go is a bit more expensive. Prices start at $399 with 4GB of RAM and 64GB of memory – and Windows 10. It’s worth repeating again that the iPad really can be very good but it works with a phone operating system.

The Store or Windows 10 Store really does not have as many apps as Apple’s ‘store’ – but it has the major applications like Netflix, Spotify and even iTunes. Then if other desktop applications can exit S mode and switch to full Windows 10.

The strongest point in Surface Go is OS (Operating System). You will not have limitations on changing your workflow or opening various programs. Surface Go is a mini PC (computer).

Now we came to the final moment. Let’s see who the winner is, even though we believe that now each of you has chosen his favorite. ? 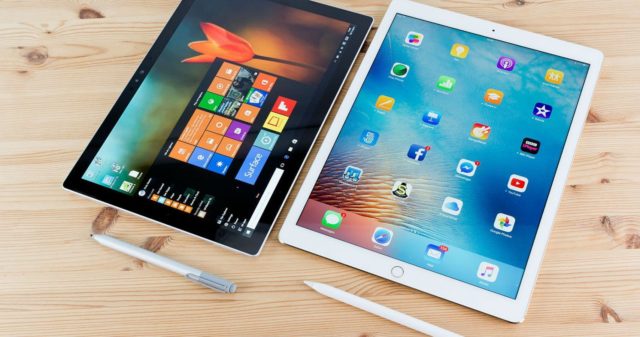 Both Microsoft and Apple make fantastic tablets, and of course you can work and play concurrently on them. On the iPad, there are more limitations to how you will work, and if you are in the touch of a keyboard or mouse, it is difficult to choose Surface Go.

As a simple tablet purchase, the iPad is much higher than all other tablets. The version of Windows 10 for tablet is not very good compared to Apple’s App Store, which is overflowing with games and apps from the most varied.

But for everything else, Surface Go is a better choice. There is less compromise, Windows Ink is great, and what you have is a small tablet that opens the same programs as your laptop or desktop computer.

We hope that through this article you will be more informed about both tablets – and have a clearer idea of ​​where these two tablets differ.Leave your thoughts in the coment section below,follow us on twitter and facebook for more news and updates.