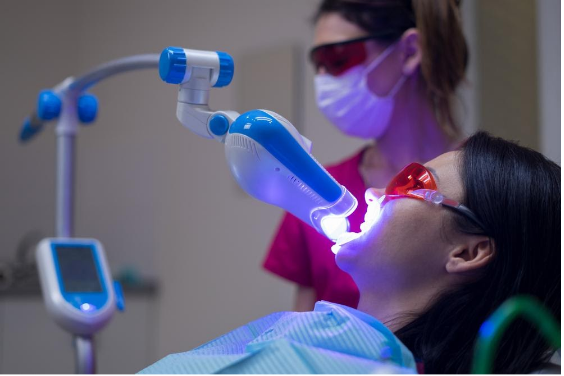 Meta – Are you suffering from stained or discolored teeth? Then read this article to understand the instant teeth whitening process with laser and it’s 100% safe.

One of the first impressions you make on people you meet is your smile.  If you have a white, shining smile, people tend to think you have good hygiene and are therefore a trustworthy individual.  If your smile reveals stained tooth enamel and damage, however, people are less likely to trust you.

There are a lot of ways that teeth can become discolored over the years including stains from eating, discoloration from age, or damage from chemicals, medications, excessive coffee, tea, soft drinks, or smoking.  Many people don’t realize the toll that these simple lifestyle choices can take on the appearance of their teeth until it is too late.

What is Laser Teeth Whitening?

The process of laser teeth whitening involves a light-activated or bleaching technique, which is popularly adopted by dentists due to its simplicity and convenient process. This brand new procedure uses a laser in combination with a translucent bleaching gel.

First, the bleaching gel is applied to your teeth.  The gel usually contains hydrogen peroxide (a standard tooth whitening agent) or carbide peroxide gel.  The gel contains special crystals which can penetrate the enamel of your teeth and whiten the surfaces.  To activate this gel and improve the level of penetration, the dentist will turn on a laser, which will then trigger the crystals to their intended effect.  How long this process takes will depend on how discolored your teeth are, to begin with.

If your teeth are particularly stained the process might take up to two hours.  At the end of that time, your teeth may be up to ten times whiter, and you don’t even need to follow up with any at-home treatment. There are many more reasons that laser teeth whitening is preferable over traditional teeth whitening.  Not only is it less damaging, but it is also less uncomfortable.

Older teeth whitening procedures usually involved the use of mouth trays which are very uncomfortable for many patients.  The time required and the discomfort alone can convince many patients to skip whitening altogether.  Laser teeth whitening isn’t like that though—the process is streamlined and straightforward.  Some patients report minor sensitivity issues during the procedure or afterward, but not any real pain.  The sensitivity, if it occurs, will usually pass in just a couple of hours.  An analgesic can alleviate it in the meantime.

Laser teeth whitening can help lighten genetically gray teeth but is most effective on teeth stained by age and habit.  It also won’t lighten crowns or veneers but may remove stains from them.

What is the cost of Laser Teeth Whitening Cost?

Cosmetic dental procedures like this one can cost only a fraction of as much abroad as they do in your home country.  If your problem is the result of a disease though, you might be able to get coverage, so check into the possibility before dismissing it.

Old-fashioned whitening procedures might be less expensive, but for many individuals, the results don’t last long at all, often no longer than several months.  Laser teeth whitening is a much more permanent solution.  The results can last several years, so when your account for that, it’s actually a cost-saving option.  Results are typically guaranteed for at least 1-2 years (much longer than the couple of months that other whitening procedures are guaranteed for), but may last even longer.  You won’t need to make any follow-up appointments either.

Laser teeth whitening is more expensive than other whitening procedures, but it comes with the promise of minimal discomfort and long-lasting whiteness, you may visit The Smile Bar Manila.  So if you are fed up with whitening procedures which leave your teeth brittle and only lighten them for a couple of months, ask your dentist about laser teeth whitening. Otherwise, you may find yourself looking for dental implants in Chattanooga due to damaged teeth that cannot be repaired anymore