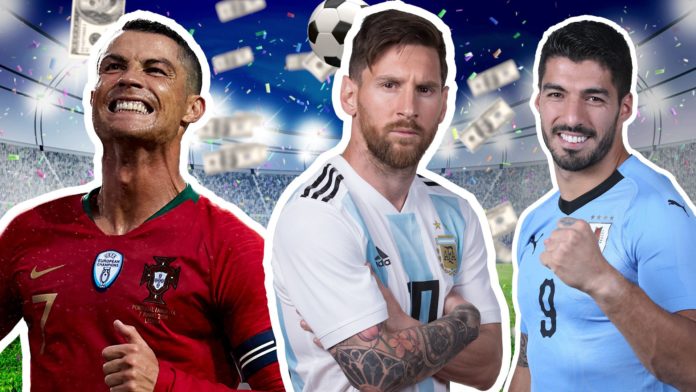 Not only the highest paid soccer player in the world, Barcelona start Lionel Messi is also the second highest earning athlete in the world! Widely regarded as the best soccer player on the planet, the Argentine forward makes around $84 million from salary while earning a further $27 million in endorsements according to Find Betting Sites, totalling an eye-watering $111 million annual salary.

Christiano Ronaldo is always in the same conversation as Lionel Messi for the greatest footballer of their generation, but while that debate remains contested the Juventus player doesn’t quite earn as much. That said, his $107 million annual salary certainly isn’t that bad!

After making an astonishing move to PSG from Barcelona, Brazilian Neymar Jr. became the third highest paid soccer player in the world, netting a cool $89 million each year.

With $28.6 million in annual wages from Real Madrid and a further $6 million in endorsements, Wales international Gareth Bale is currently the 4th highest paid player in the world.

Alexis Sanchez transferred to Manchester United from Arsenal for a modest fee, but his annual salary of $30 million is anything but. This makes him the highest paid player in the England.

Paul Pogba was the highest earner at Manchester United before the arrival of Sanchez, yet he still earns a whopping $29 million each year, most of which is from his salary.

Many were surprised to see Oscar move from Chelsea and the English Premier League to Shanghai SIPG in China, but the fact he now earns $27 million annually makes the move that bit more understandable.

Barcelona forward Luiz Suarez made the move to Barcelona from Liverpool in 2014, resulting in an impressive $26 million per year contract.

A new contract from Germany international Mesut Ozil has made him one of the highest earners in the Premier League, making over $400,000 per week.

Sergio Aguero has scored an astonishing 222 (and counting) goals for Manchester City, which is why his yearly income of $23 million seems like money well spent.

That makes up the top ten soccer earners – check below for what the next top ten earners make!