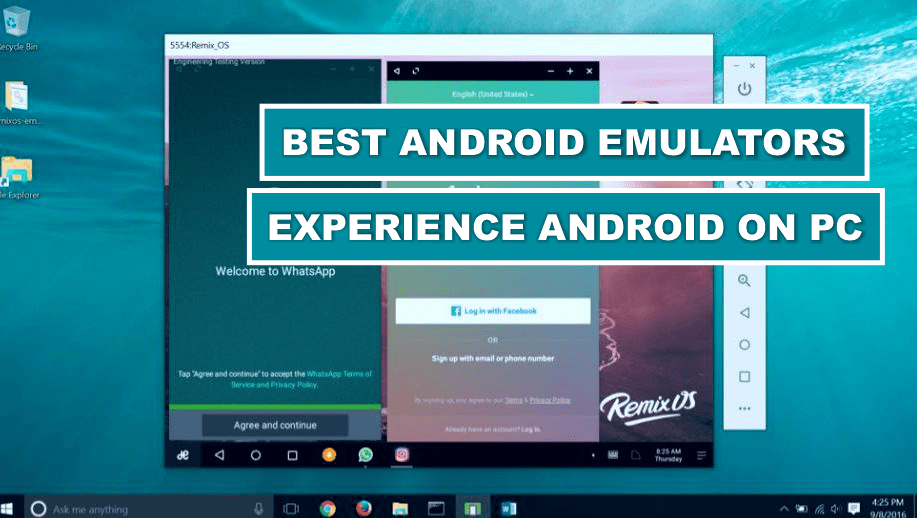 Android emulators are a program that provides a virtual environment on your PC that will work exactly like an Android mobile or a Tablet. So in this virtual interface you can do thinks like on you Android mobile device like installing Apps playing games etc. However, today in this post we will share our selection of top 15 best Android emulators of 2020 so you can experience Android on your PC. Android emulators may serves for variety of purposes like for developers to tests they’re apps and games on large screens or the users that may want to experience Android OS on they Windows PC with a keyboard and mouse. So, follow the article below to find more on our top Android Emulators for PC with some pros and cons of why using then.

Why to use Android Emulators?

They may be various reasons to use an Android Emulator. We are going to mention two of then.

The main reason me be for gaming. Many gamers use Android Emulators on they computers to easily play they games and not rely to the battery of the android device.

One more reason if for development. As we mention above, developers of Android apps and games want to test they’re apps and games to as may devices as possible before the final lunch.

They may be many reasons why someone want to use Android emulators. For example a gamer may need to use mouse or keyboard for playing games or just may not have an Android device, also a developer may want to tray they applications before sending to its users etc. So depending on the case, emulating Android on PC is very simple and here will show you our list of top 15 best Android emulators of 2020.

BlueStacks is one of the most popular Android emulators which is totally free to download. Since the launch, on 2011, the application has extended the limits of Android ecosystem. BlueStacks is available for both platforms Windows and Mac. It was the first Android Emulator that really worked and it is still getting regular updates. The main target of BlueStacks are games.

Bluestacks 4 (launched in 2018) it has the most features and the latest update put Android 7.1.2 (Nougat) on it, also got some improved speeds even in old computers.

Genymotion is the best for Android emulator for developers to test they app and games. This Android emulator comes with many features that help in testing apps and games. Genymotion can simulate 3000 configurations of devices and with support for more than 40 Android devices. Genymotion is available for the three main platforms: Windows, Mac, and Linux. The emulator is compatible with Android Studio and Android SDK.

Remix OS Player provides Android’s Marshmallow emulation also unlike other emulators, the Remix OS Player interface is optimized to be computer friendly. The emulator is optimized for app development and game performance. It comes with a one-click configuration and is completely free. Remix OS Player is mostly for gamers and offers many features like running multiple games at the same time. The only drawback is that this android emulator isn’t in development any more but it should be ok for some years.

Remix OS allows allows to save games while you play, also allows simultaneous and multiplayer play, features which makes it a great android emulator. The only problem is they High requirement OS. Remix OS requires, at least, a Core i3 processor with an 8GB storage.

Nox App Player is one of the best and lightest Android emulators, and not only that as this emulator has a clean and tidy UI. The emulator also allows to run games and heavy apps without losing performance. Nox is compatible with a wide range of Android game controls. Also Nox supports most of the games developed for Android.

It also allows you to install the Play Store as well as other third-party Android apps. You can download it for Windows and OSX for free. Anyway since the last year Nox app player become form the best Android emulator to the worst as it comes with pre-installed unwanted software that according to users are “difficult to delete”. Also some antiviruses have marked it as suspicious.

> Check Out: Steps to Download PS4 Emulator for PC

VirtualBox is an impressive cross-platform tool that allows you to run any Android operating system on your Windows computer. It has some classic features along with those traditionally provided by other emulators.

The emulator is usually used by developers to test their mobile apps based on Android. Therefore, you can also create your own emulator using VirtualBox.

Archon Runs Android applications with Google Chrome on Mac OS, Linux and any version of Windows. To run this emulator the only requirement is that you have to install the Chrome version 37 or upper version on your system.

The Archon Android Emulator is not best for hardcore gaming, but its ideal for productivity app thanks to its easy access.

MEmu has an excellent performance in terms of games. It is compatible with all versions of Windows from Windows 7 and supports all the latest graphics chips and cards from Intel, AMD and nVidia.

This emulator also supports keyboard, mouse and Xbox/PS drivers. MEmu provides compatibility only with Android Lollipop. MEmu offers a simple way to install apps: just drag and drop the APK into the emulator’s interface that’s it and then you can install any applications or games you want. In addition, MEmu allows you to run other Android emulators at the same time, which is quite convenient.

> Check Out: Download Paid Apps For Free On Android (How To)

KoPlayer is a new and completely free Android emulator. Its main objective is to run games, as it allows you to emulate Android controls with the computer keyboard. Also, record the game and load it from other devices and equipment. Like most emulators, it has random execution problems, but nothing serious. In addition, it has a lot of utilities and everything at no cost.

The drawbacks of KoPlayer may be that it freezes sometimes and the app is a little buggy.

Andy is an emulator that allows you to download almost all Android apps and games directly on your computer. The most interesting thing about this emulator is that it provides unlimited storage capacity as well. Andy has support for Windows and Mac compatibility. You can use your own mobile as a remote control when running games in the emulator.

LeapDroid stands out as one of the best android emulators with its well-organised UI. The emulator has clear built-in functions, which improves the user experience in games, apps, compatibility, etc.

The main focus of LeapDroid is speed and performance and it will let run all high-end gamen on PC. It does not offer many option it terms of optimizations except for Android general settings.

Droid4X is an excellent simulator of the original Android operating system that you can run on your computer. With Droid4X, users will have a virtual Android device with individualized configuration and performance. Droid4X also allows you to download Android apps and games, and execute them on a computer screen quite conveniently. It has a version of Windows and Mac, while the iOS version is in development.

You can use this app for some productive work.

Windroy is one of the well-known Android emulators which is light and with lots of functions. The emulator has some apps and games pre-installed, and you can get more from the Google Play Store. Windroy will allow you to run all kinds of Android apps, and it offers excellent compatibility. The emulator is free to download and very easy to install, it will worth give it a try.

Windroy supports both full screen and windowed mode and different user interface resolutions. The app can be controlled using the mouse or keyboard. This emulator is great for developers who need to test they’re apps.

Game Loop previously known as Tencent Gaming Buddy, has made it to the top of Android Emulators for PC thanks to its exclusive support of Call of Duty Mobile game on PC. Before the lunch of COD it also supported PUBG and some titles form Tencent Developer. GameLoop is mostly dedicated to gaming and has lack of support for other Android apps. You will also notice the lack of numerous gaming titles.

This emulator has an built-in emulator but lack of features and it is not build for general users or playing heavy games.

PrimeOS is an open-source Androidx86 based OS that may booted using USB drive ar may be dual booted on a PC. Thanks to its great UI and the Android support this Android Emulator may be equal to ChromeOS in some cases. Its main focus it to provide an Android-like experience on PC.

So, above in this post we have listed top 15 Best Android Emulators of 2020 for PC for all your needs. If you have any other favorite Android emulator, please let us know in the comment section below,follow us on twitter and facebook for more news and updates.