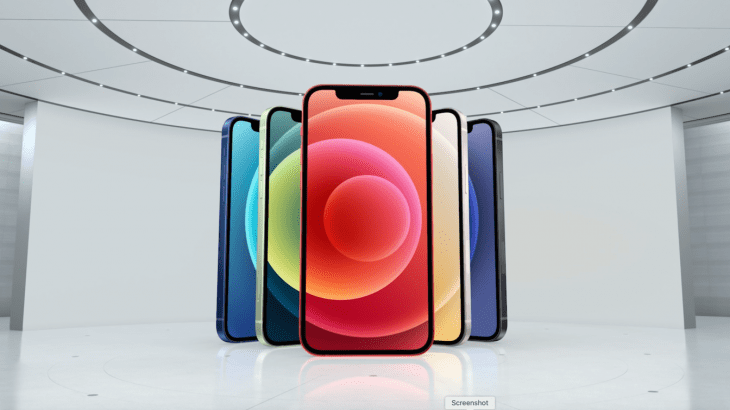 iPhone 12 is finally among us: 4 models, a mini, a standard, a Pro, and a Pro Max version. New processor, 5G and LiDAR sensor

This year took longer than usual but the iPhone 12 is finally among us. Most of the rumors turned out to be correct, 4 models, a mini, a standard, a Pro, and Pro Max version. A new processor, 5G, and LiDAR sensor. The latest version of the Apple smartphone will also be available in several variants and sizes as the company adapts consumer behavior around mobile devices.

The inclusion of 5G does not constitute any news for consumers as a whole. Apple is not the first company to bring a 5G smartphone and according to statistics 13% of phones sold in the first half of 2020 had 5G technology. 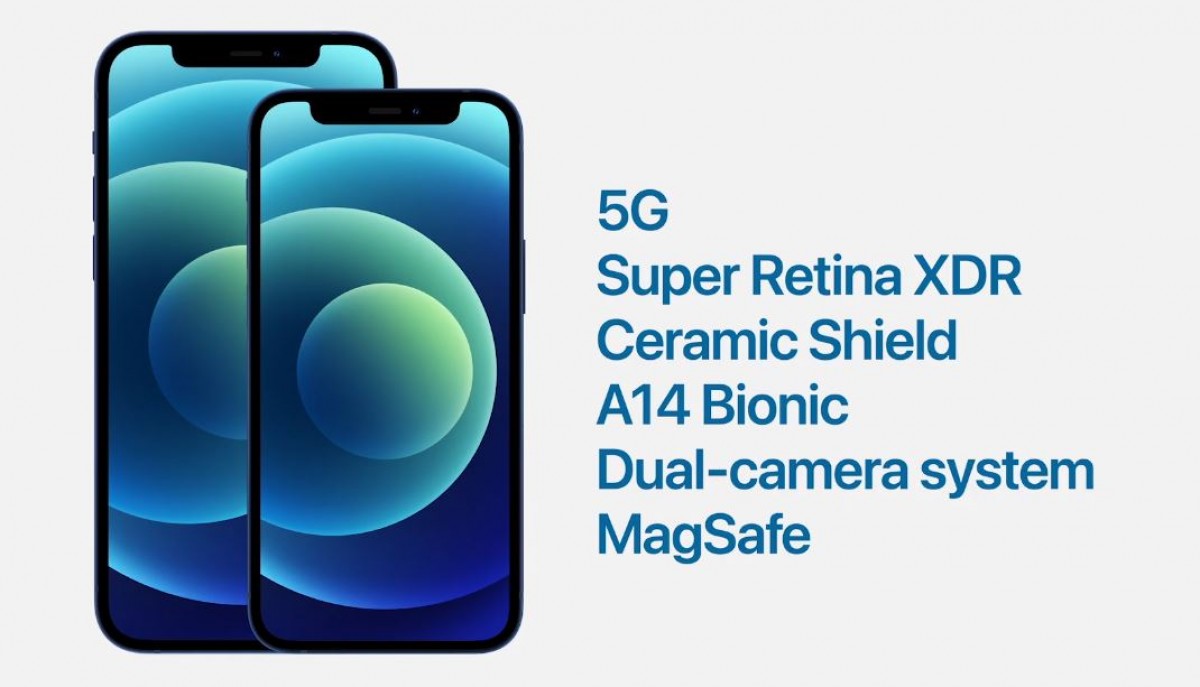 The whole iPhone 12 line has undergone a redesign taking the layout elements from the iPad Pro.

First was introduced the iPhone 12, 6.1″11% thinner, 15% smaller, and 16% lighter and flat angles, distinctive of this generation. OLED screens are uniform on all fours and moreover will be protected by a special ceramic coating to guarantee 4 times more durability. Like the others, it will come with the latest A14 Bionic processor and the only smartphone with 5nm processing technology. This guarantees greater power but also efficiency in energy consumption. According to Apple, this processor is 50% faster than all the competition.

As was predicted the iPhone 12 has two rear cameras, a 12-megapixel main and a super-wide 12-megapixel taken from last year’s model. Night Mode has been upgraded to all models and added to the selfie camera. 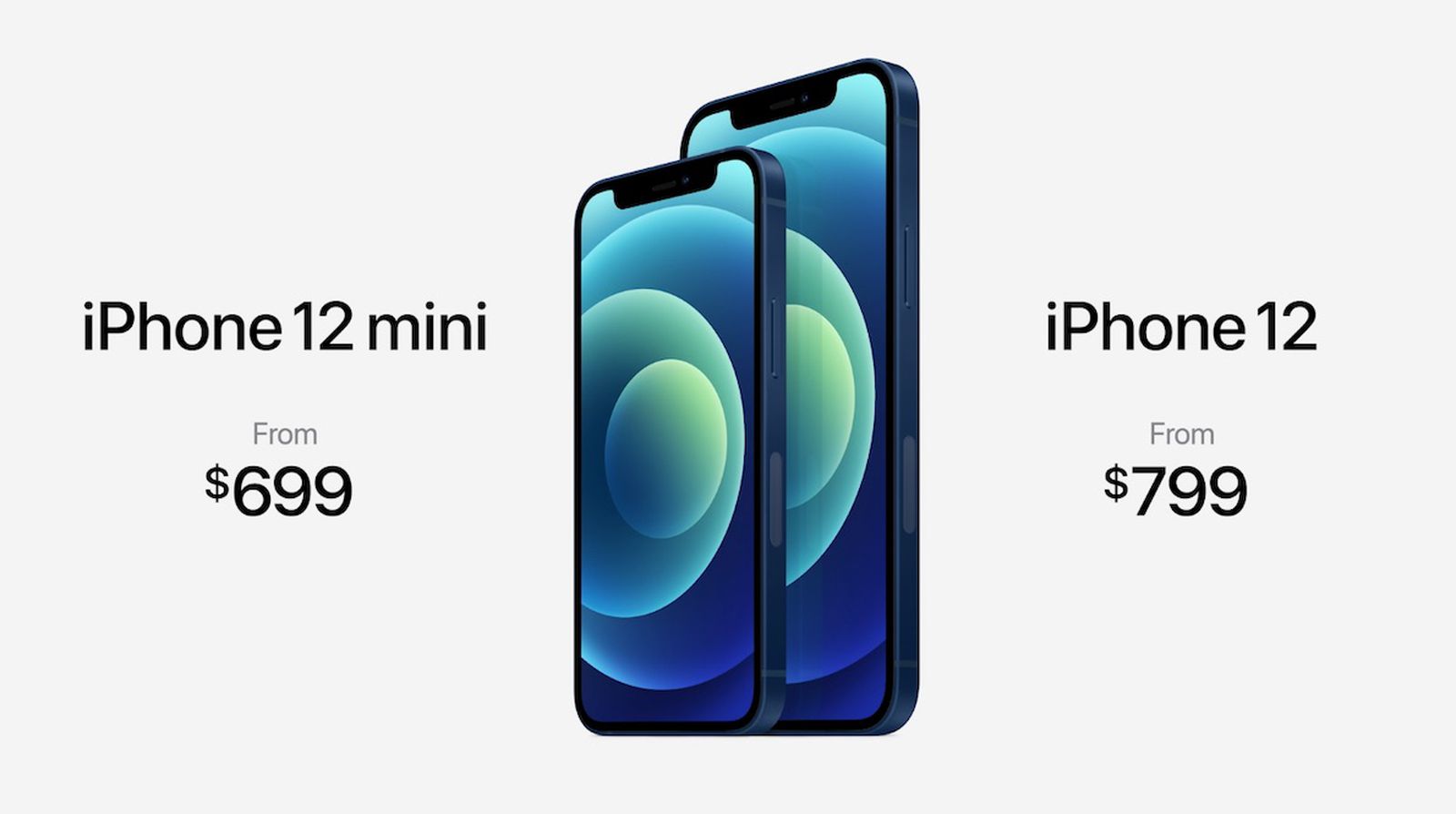 Then was unveiled the iPhone 12 Mini which fortunately has almost the same power but comes in more modest dimensions with a 5.4 “screen. Features 5G and has the same specifications of the camera as the standard version. The dual set of which has received more investment on the software side.

The difference of course holds the Pro tag which from Pro Max differs only in dimensions. The Pro has a 6.1″ screen while the Pro Max 6.7″. The A14 Bionic is 5nm here too, but unlike the first two, it has additional capabilities for real-time processing of what the camera captures or shoots, an asset that will cost you hundreds of dollars more. 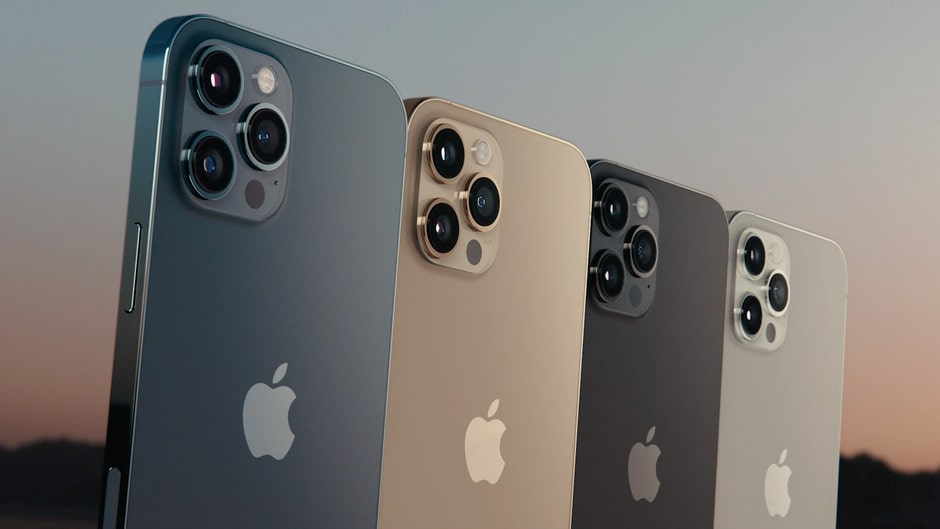 The three rear camera sensors have undergone changes mainly in the aperture to work better with low light. Contrary to expectations, the Pro and Pro Max will not have four lenses, as the LiDAR depth sensor is smaller and less noticeable. It will add pretty much advantages to light processing as well as how fast it hits objects. This sensor will contribute quite a bit to the plans the company has for the AR sector.

The new Pro models feature Retina XDR OLED screens, A14 Bionic processors, glass with ceramic cover, LiDAR scanners, and 5G technology which are the maximum that Apple can offer. The iPhone 12 Pro and iPhone 12 Pro Max goes on sale in three configurations: 128GB, 256GB, and 512GB, and four colors: graphite, silver, gold, and blue. The pandemic apparently also affected Apple, which this time decided to start offering the iPhone 12 Pro from $999 and the 12 Pro Max from $1099.

In the Pro Max model where the screen is bigger, Apple says it has packaged 3.5 million pixels. The back of these models is matte glass while the frame is made of steel. iPhone 12 Pro is water-resistant to a depth of 6 meters for 30 minutes thanks to IP68 certification. Another reason why people are willing to pay more with Pro models is the camera system. Orders for iPhone 12 Pro start on October 16th and sales on October 23rd. For iPhone 12 Pro Max orders start on November 6 and sales on November 13.

Thanks to the A14 Bionic processor, Apple brought a new “Apple ProRAW” format for professional photographers where the image retains editing capabilities. Specifically, users have more control over the colors, details, and dynamic range of the image on the iPhone. 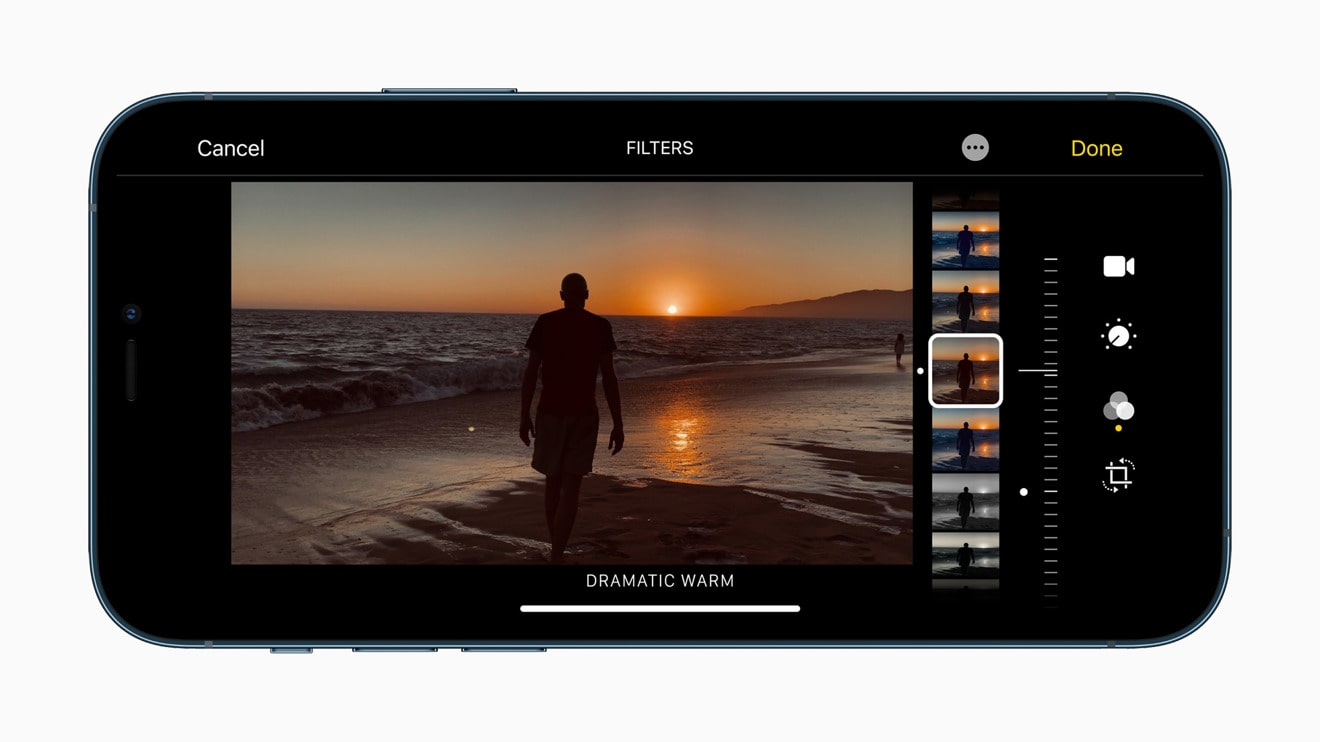 The main sensor has a 7-element lens and f/1.6 aperture significantly increasing performance in low light. The ultra-wide-angle camera (ultrawide) has a field of view of 12 degrees, the telephoto a length of 52mm, and 4x optical zoom. The Phone 12 Pro Max has a 47% larger sensor improving the performance in low light by 87%. Also, the telephoto camera in this variant has a focal length of 65mm and 5x optical zoom.

Night Mode has also been extended to ultrawide cameras and Night Mode and Time-lapse modes promise more detail. Deep Fusion technology is faster. In video recording, the new models offer HDR video with Dolby Vision up to 60fps and optical stabilization. The innovation is the LiDAR scanner which has a role to play in augmented reality. In addition, this scanner can increase the autofocus performance in low light by 6 times. A novelty for the iPhone 12 is also MagSafe technology where users can charge the phone wirelessly or use magnetic accessories. Apple will sell a MagSafe charger, a silicone case, and a leather case. The MagSafe Duo charger is capable of charging iPhone and Apple Watch simultaneously will debut in the coming weeks.

Innovation for this year

The smartphone has an OLED screen that Apple calls the Super Retina XDR doubling the number of pixels compared to the LCD screen that the iPhone 11 had last year.

All smartphones have the A14 Bionic chip. This time the chip has six processor cores and four graphics cores. Upon revealing this information the company took the opportunity to talk about the arrival of the League of Legends game on the iPhone.

With the iPhone 12, Apple decided to return to MagSafe, a magnetic system integrated into the back of the device through which accessories connect to the phone. These are mainly accessories such as wireless chargers and cases. 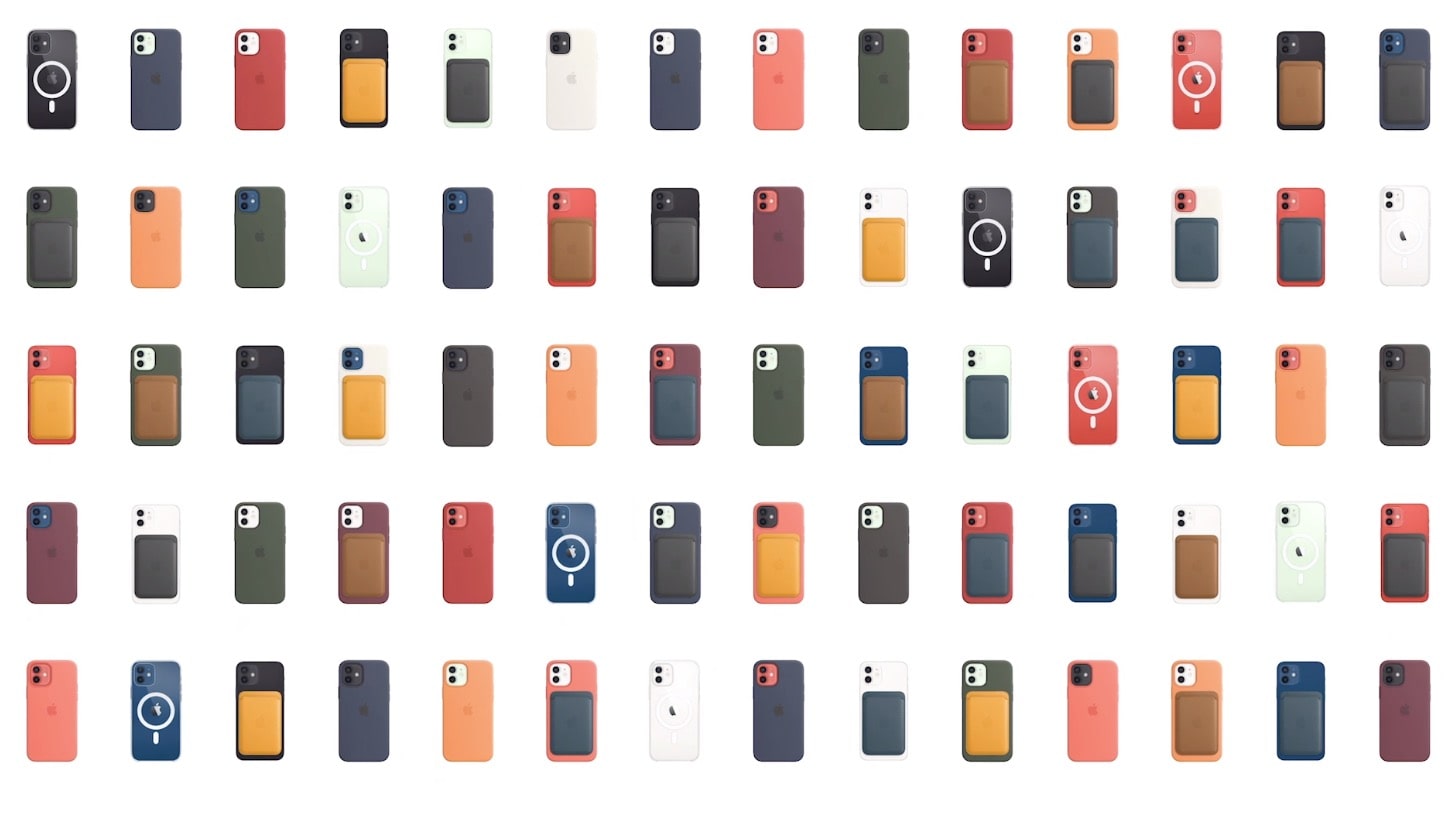 Lastly, regarding the packaging, Apple has decided to empty it, because with the purchase of the iPhone 12, you will no longer get Earpods wired headphones nor the charging adapter. Apple says it did it to protect the environment.

> Check next: Apple today will show more than the iPhone 12, a technological revolution